Traditional as the year-in-review is, no year seemed more fitting for reflection than did 2012. In light of the many “turning points” that the doomsday promised, LEAP’s first issue of 2013 seeks out the changes that took place in and around the art world— as well as those that did not. This introspection takes form in essays from artists, curators, critics, and scholars from around the globe. Hou Hanru further expounds on the need for a “third way”; David Joselit reiterates the concept of “buzz” as currency; Wang Huangsheng muses on the state of the museum in China; Wang Jianwei philosophizes on the idea of withdrawal; Theaster Gates lyricizes about his inability to say no; Nancy Adajania peers at the biennial typology by way of Kochi; Xu Zhiyuan laments the state of the written word in China; and Dong Bingfeng, Fumio Nanjo, Amy Cheng, Carol Yinghua Lu, and Gao Shiming offer equally lucid perspectives from which to consider yet another year gone by. To complement the cover story, a special insert witnesses several dozen young Chinese artists summarize their feelings about the Apocalypse by way of one photo and one sentence each. As always, our middle sections gives way to artist features. Longtime LEAP contributor Pu Hong delineates the paratextual nature of the practice of painter Duan Jianyu, while Fang Tze-Hsu discovers a “map of the frustrations of Western modernity from a Taiwanese perspective” in the work of Chen Chieh-jen. The top of LEAP 19 weaves between all forms of contemporary art. From Shenzhen, Liaoliao considers the definition of independent animation in China. From Miami, Stephanie Bailey ruminates on the art fair as panopticon. In Beijing, solemnity looms through the sculpture of Berlinde De Bruyckere, and through the miniaturized painting of Kang Wanhua, so does the importance of survival. In the photography of Chen Zhe, the relationship between physiology and psychology floats to the fore. And elsewhere in this section, of course there is more. In our bottom section, the regular mixture of –ennials, group exhibitions, and solo showings at the core of LEAP’s critical eye turns its gaze first to Lianzhou Foto Festival, the Asia Pacific Triennial, and the major review of the mid-century Japanese avant-garde “Tokyo 1955-70” at MoMA. Solo exhibitions from Aida Makoto, Gao Yu, Cui Jie, Xie Nanxing, Lee Kit, Charles Lim, Huang Yong Ping, and Lana Lin also capture our attention, as do a handful of group showings in Chengdu, London, Taipei, and Beijing. 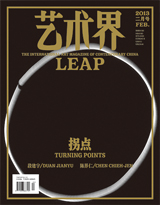