Is today’s Hong Kong still a cultural desert? To what are local intellectuals and art critics devoting their attention? And what are the local artists doing? What kind of relationship is there between art and the lives of the Hong Kong people? Will a spotlight on art lead to a renewed freedom of cultural expression? First confronting the macro-narratives of capital, this issue’s cover feature attempts to use a multitude of micro-narratives to excavate the reality of the Hong Kong art world, and the work of its practitioners, hidden beneath the charm of its capital and confusion of its culture. David Clarke considers a distinctly Cantonese notion of time; MAP Office discuss their use of the city as a museum; Robin Peckham delineates the territory art-as-luxury; wen yau inspects art-as-social-activism; Leung Po-shan Anthony recalls the political endeavors of artist Chow Chun Fai; Stephanie Bailey sees in Hong Kong’s negotiation of space the idea of the commons; Feng Yuan seeks ways for the city to reorientate itself; and Chin Wan-Kan and Yun Siu-Wai demonstrates the struggles for cultural resources in the Fragrant Harbour. Thematically and spatially abutting each of these articles is a series of dialogues with Pi Li, Johnson Chang, Kurt Chan, Aenon Loo, Eve Tam, Lesley Lau, and Lam Tung Pang. The remainder of our middle section brings with it two artist features. He Cong defines the video art of Zhou Tao as an exploration of the body and its “depth of field,” while Taipei-based critic and curator Wang Yunglin offers an interpretation of Yucheng Chou’s immaterial communications. Opening this issue are essays on the archive of Filipino artist Roberto Chabet; on the experimental art space Store & Space in Guangzhou; on the current state of the Singaporean art system; on the latest work of artist Guan Xiao; and on the narrative-less practice of Liu Shiyuan. Readers will also find an interview with Lars Nittve, a four-scholar conversation on the modernization of Chinese art, and in our column “Moving Up,” introductions to the work of Nicolas Ceccaldi, Nicolas Deshayes, Hannah Perry, Ken Okiishi, and Lutz Bacher. Reviews in this April issue consist of solo exhibitions from Qiu Xiaofei, Andy Warhol, Zhang Lehua, Liu Wei, Song Dong, Anida Yoeu Ali, and Duan? Jianyu and Hu Xiaoyuan. We also write up group shows in Guangzhou, Hong Kong, Taipei, Jakarta, and Singapore, while longer critiques are given to the Kochi-Muziris Biennale and group shows at ZKM and OCAT. 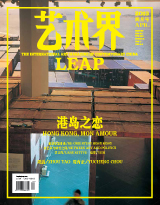