Contemporary art and science fiction, from the prevalent perspective, have little in common, and it is with this awareness that we have prepared this issue of LEAP. From another perspective, they do and can enter into an honest communion of form, aesthetic, and ideas. In our imaginative probing of both, we discovered a fierce accumulation of creativity and idealism, as well as a great vastness of perspective and mission on the part of their creators. SF critic and writer Wu Yan, in his history of Chinese science fiction, posits the genre not only as the embodied tension between humanity and its uncertain future, but also as a hard questioning of Chinese reality. For his part, the scholar Qin Linzheng provides a reflective context for Wu’s ruminations with an overview of the evolution of futures studies in China, while writer, critic, and translator Tintinnina examines three primary kinds of aesthetic experience offered by SF. Finally, Valérie Mavridorakis explores the relay of visual and verbal images between science fiction and art, and we commission artist Heman Chong to interpret Kawamata Chiaki’s 1984 novel Death Sentences, in which the written word spells the demise of twentieth-century art history. And in between each of these articles, we offer four divergent imaginations of the future of contemporary art in short-story prose.

Ending the middle section, Liu Wenjiong proposes the existence of an “anti-structure” in the socialist-inflected canvases of Li Yousong, and Chen Fong Fong attempts an understanding of the enigmatic psyche of Lin Xue, who, despite recent international fame, still leads a rather hermetic existence.

In our front section, Karen Archey investigates the “poor images and rich texts” of artist Hito Steyerl, while Ting Wing Yan Vivian explores the ceramic-based “future archaeology” of Annie Lai-kuan Wan. We also sit down for an impassioned tête-à-tête with curator Gunnar B. Kvaran on the cusp of the Biennale de Lyon, and follow philosopher Jacques Rancière during his poetic first visit to the world’s factory. Stephanie Bailey looks into the fairness of the art fair vis-à-vis Art Basel, and then discovers the surreality folded within in Shezad Dawood’s sci-fi feature Piercing Brightness. Sasha Zhao, meanwhile, pledges allegiance to lunacy in her look at the work of artist Hu Yun, and Orit Gat delineates the meaning of this year’s restaging of Harald Szeemann’s seminal exhibition “When Attitudes Become Form.”

Bringing up the rear of the issue is our customary selection of reviews of exhibitions scaled both large and small. Four-page critiques are allotted to the Auckland Triennial, the 55th Venice Biennale, and Wu Shanzhuan and Inga Svala Thorsdottir’s latest showing. Group exhibitions in Berlin, Kiev, Shenzhen, Nanjing, Suzhou, and Wuhan are considered, as are solo stylings from Qiu Zhijie, Lam Tung-pang, Fang Lu, Cheng Ran, Wolfgang Tillmans, and Shi Qing. 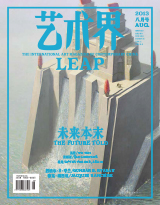