Commemorating the 30th anniversary of Foucault’s passing, this issue places his thought within the context of Chinese contemporary society and urban life, beginning with biopolitics and touching upon the language of the Panopticon, networked management, artist participation in mental health programs, a wellness regime based on The History of Sexuality, and a theatrical script imagining the final moments of the theorist’s life. We use Foucault’s mirror to reflect those present and absent, both artists and viewers, and give form to microcosmic systems of biopolitics hidden within the quotidian.

Alex Israel picks and chooses from the visual and cultural resources of Los Angeles, including that famed exporter of mainstream ideology and apocalyptic imagination: Hollywood.

Charles Lim’s work ranges from the accumulation of historical objects and contemporary media to both empirical documentation and subjective narrative of the city-state’s relationship to water—everywhere, but not a drop to drink.

“Performance View” introduces Kwan Sheung Chi’s week-long durational performance The 21st Century Undead Coterie of Contemporary Art at Para Site; “Sound Check” focuses on “Zoomin’ Night,” Beijing’s most significant experimental music site; “Shop Talk” demonstrates how Xu Zhe responds to the topic of the environment with his own observations; while “Book Shelf” launches Collective Imagination Stems and FONGFO, two publications curated and edited by groups of artists. Additional content includes Bao Dong’s review on Lin Ke’s solo exhibition “LinK,” and “Zoo as Metaphor,” which blurs the boundaries of what an art exhibition can be, considering whether the metaphor of the “square” originates from pigeons or ravens. 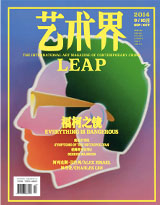