This summer seems to welcome a flood of performance, but we are more interested in the social space of the theater, and how artists have begun to adapt this institution to their own needs. Curating seems to be more and more an act of choreography, organizing interventions and other processes that interact with collections and social spaces. As theater productions seem more and more like performance art, and artists’ productions take on new meanings in terms of scale and site, we decided to take a good hard look at the core actions of acting and directing in LEAP34.

This issue also inaugurates a slight tweak in format to LEAP: moving forward, readers will find more sections dedicated to visual and conceptual collaborations with artists, more cultural criticism, and sustained engagements with specific artistic practices, and a broader swath of shorter reviews from across the world.

In this issue’s cover package “Chalk Circles,” our senior editor Song Yi looks into the theatrical spaces in artists Wang Jianwei, Yang Fudong, and Cao Fei’s work. Vivian Ziherl discusses the political potential and legal poetics in artists’ performative practice. Taiwanese theater director Wang Mo-lin pens “Modernist and Anti-Modernist Theories of the Body,”pointing out the absence of individualism in modern theater practices in post-war Asia. Scholar Walter Hsu chronicles the development of performance and everyday life in contemporary China. Whereas our New York-based author Kyle Chayka zooms in on artists’ performances on and for the internet.

Our top section presents in-depth profiles of two mid-career artists, Leung Chi Wo and Anicka Yi. Leung Chi Wo spent his formative years in Hong Kong as he grew into the role of a contemporary artist in the final years of British rule. His generation experienced the transition firsthand, living between local and international cultures, and owning a complex national identity. Karen Smith writes, “Leung is an artist shackled to history, a fact that is expressed in his work in ways subtle yet profound.” Korean-born, New York-based artist Anicka Yi’s work captures the signs, evidence, and residue of human emotions and states transmitted through text messages, spaces, food and fluids. Also featured in this issue’s top section are artist Liu Yin’s paintings inspired by news and advertising images, new media artist Lawrence Lek’s award-winning interactive video installation “Unreal Estate,” and London-based music collective PC Music.

On the occasion of artist William Kentridge’s Beijing retrospective, this issue’s bottom section invites three practitioners from different backgrounds, John Rajchman, Mo Zhou, and Sun Xun, to think about—and along with—Kentridge. Also featured are three different perspectives on the myriads of exhibitions in Venice this summer. Lastly, we have included 29 short reviews, in an anonymous fashion, on exhibitions around the world, ranging from “After Utopia: Revisiting the Ideal in Asian Contemporary Art” in Singapore, Rockbund Art Museum’s “Chen Zhen: Without Going to New York and Paris, Life could be Internationalized,” “Art in the Age of … Planetary Computation” at Witte de With, to “The Great Ephemeral” at the New Museum.

P034 EXHIBITION MAKING “ILLUMINATED”: A MARRIAGE OF ARTISTIC CREATION AND CURATORIAL PRACTICE
“Illuminated,” curated by artist Guo Hongwei, is the fifth exhibition held at his nonprofit Gland Space. The exhibition, born of the artist’s personal creative experience, embodies the eclectic accumulation of his work as it has evolved over time.
Text：Song Yi

P040 INSTITUTIONAL CRITIQUE TAIPEI CONTEMPORARY ART CENTER PAST AND PRESENT
Taipei Contemporary Art Center was founded in early 2010, following Jun Yang’s A Contemporary Art Center, Taipei: A Proposal at the Taipei Biennal 2008. With the help of the local community, he took over a neglected corner of the park around Taipei Fine Arts Museum and turned it into a temporary interactive stage, inviting people from various disciplines to discuss why Taipei needed?a contemporary art center.
Text： Ricky Cheng

P054 LIU YIN: DISSOLVE
Liu Yin has realized, like most of us, that she spends far too much time browsing news and advertising images. This tremendous swatch of visual information has long been part of our lives, but its intrusiveness has risen to historic heights thanks to the pervasiveness of the smartphone. News images, an important means to visually record and disseminate what is happening around us, constitute a raw database that makes visual critique and research possible.
Text：Xi Winkler

P060 LAWRENCE LEK: UNREAL ESTATE
Lawrence Lek’s series “Bonus Levels” is a series of site-specific, immersive video game installations. Each section of the project is structured like a novel, based on a real building that is transformed into a 3D rendering.
Text：Zhang Hanlu

P066 PC MUSIC AND PERFORMING PROFESSIONALISM
In the space of two years, PC Music has gone from little more than a Soundcloud page to a cult dance music collective followed by those in the know and from there to a legitimate pop culture happening—the loosely-defined label/brand’s artists are now seemingly poised on the brink of crossover success.
Text：Simon Frank
P072 CROSSOVER

P076 NAMES FOR THE SELF, SHAPES FOR THE WORLD: LEUNG CHI WO
Hong Kong was the proverbial cultural desert, a place in which art was largely a foreign import and, in the early 1990s, of a highly restricted nature. It was a situation Leung Chi Wo himself was instrumental in arresting with the founding, in 1996, of the artist-run collaborative project Para Site. Leung is an artist shackled to history, a fact that is expressed in his work in ways subtle yet profound.
Text：Karen Smith

P084 PALPABLE AND PRESENT: ANICKA YI
In 2013, Korean-born, New York-based artist Anicka Yi began a trilogy of exhibitions entitled “Denial,” “Divorce,” and “Death,” inspired by human emotions attached to love and heartbreak. Presented as a forensic investigation of these affective, illusive, and hardly measurable states, Yi’s work captures the signs, evidence, and residue of these phases embedded in and transmitted through text messages, spaces, food and fluids.
Text：Lucy Chinen

COVER FEATURE CHALK CIRCLES
The artists’ theater—exhibiting the movements of the body; linking temporality, the everyday, social relationships, and critique; releasing embodied affect; erasing boundaries between the stage and the world around it; mixing spectator and performer; traversing a landscape produced by the body—the artists’ theater must be redefined.

P098 A NEW STAGE
The theater, once solely the spatial medium of performance on the stage, has slowly become a common part of contemporary artistic parlance, and has greatly extended its own meaning as well.
Text：Song Yi

P108 CALLIGRAPHY, UNIVERSALITY
Since the 1980s, practices of calligraphy in contemporary art have tended towards a symbolic presence. In the world of calligraphy, there now seems to be an attempt to liberate the medium from established systems and open up to new modes of writing and visual styles, from the modern approach of Qiu Jian to the academic school of Chen Zhenlian, and from the highly controversial folk style of Wo Xinghua to the popular book style of Liu Zhengcheng.
Text：Lu Mingjun

P114 FUTURES
I’ve always believed that more than half of american sign language, a highly spatial language just like music, is conveyed on your face for grammatical purposes. Every time I sign the concept of “future”, I always find myself thinking about it in different shades or even Personalities.
Text：Christine Sun Kim

P120 PERFORMANCES I HAVE (NOT) SEEN
What does one talk about when one talks about performance in art? Across an unmistakable recent wave of conferences, special journal issues, and survey exhibitions, performance frames a near-apocryphal field. It clusters together practices that often have more in common through what they lack than through what they share.
Text：Vivian Ziherl

P128 MODERNIST AND ANTI-MODERNIST THEORIES OF THE BODY
With the 2010 publication of Taiwan Body Theory, a collection of essays by theater director Wang Mo-lin, a longtime participant in Taiwan’s Little Theater movement, there finally exists a conclusive volume of Wang’s thinking on the body in relation to theater, dance, political economy, and medicine. Wang is of the opinion that, if we speak of the body as a “primary place of experimentation,” then the conversation necessarily becomes one about modernity—specifically, the bodily experiences of modernism in Taiwan and mainland China. Many strands of thought formerly beneath the shadow of consumerism urgently demand clarification.
Text：Wang Mo-lin

P136 LI MING: WITH FRIENDS, LIFE IS A WHIRLWIND
On the afternoon of June 1, 2006, Li Ming filmed the first Afternoon of June 1. Thereafter, Li Ming, Yang Junling, and Lin Ke, all members of the art collective Double Fly Art Center, formed a pact to get together on June 1 every year and shoot video spontaneously for an afternoon. This year marks the tenth children’s day holiday they’ve spent together.
Text：Guo Juan Photo：Squirrel Li

P144 PERFORMANCE AND EVERYDAY LIFE IN CONTEMPORARY CHINA
The critical performing arts—from theater to performance—reveal the performative elements of everyday life. More often than not, this means exposing the power mechanisms behind the normative patterns of social behavior. Performing cultures in China have slowly evolved towards this deconstructive purpose since the 1980s.
Text：Walter Hsu

P150 THE INTERNET AS THEATER
In front of a live audience at the Gowanus Studio Space in Brooklyn, American artist Angela Washko logs into the massively multiplayer online role-playing game World of Warcraft. Her character is no different from the other creatures inhabiting the world, bristling with weapons and with a jungle cat at her side for a mount. But Washko isn’t in the game to earn gold or upgrade her character. She’s there to interrogate the meaning of feminism.
Text：Kyle Chayka

P162 William Kentridge: A Reckoning
In William Kentridge’s Beijing retrospective, “Notes Towards a Model Opera,” a context-specific new work, creates a fraught moment to revisit this quote from a quarter-century ago, not least due to the universality of the “rock” in modernist experiences beyond South Africa.
Text： Xin Wang

P170 Freedom can be Hard to See
Originally founded in 2008, the Garage has spent the past few years hunkered down in a Shigeru Ban-designed temporary structure in the newly revitalized Gorky Park while its permanent building was under construction just steps away in the park’s iconic Vremena Goda, a massive modernist restaurant built in 1968 as a prototype for feeding large quantities of people.?
Text：Kate Sutton

P178 Venice: All the World’s Futures
Venice in midsummer: the sun is blazing, the streets are heaving. Escaping the searing heat outside, I slip into the cool Central Pavilion of the Giardini and sit down in front of John Akomfrah’s three-screen film installation Vertigo Sea, which instantly calls to mind the infamous slogan of a certain magazine: the world is sinking, we are celebrating.
Text：Nikita Yingqian Cai

P181 Venice: Asian Pavilions
This could be the year that the contours of a global Asia finally appear in the increasingly post-national pavilions from the continent. Working with curator Doryun Chong, Tsang Kin-Wah does the unthinkable to the Hong Kong pavilion, enviably located just across from the main entrance to the Arsenale: he covers over the lion’s share of the courtyard that Lee Kit put to such poetically barren good use two years ago.
Text：Robin Peckham

P184 Venice: Slip of the Tongue
Punta della Dogana, a stately edifice overlooking the Grand Canal, is the site of artist Danh Vo’s curatorial presentation, “Slip of the Tongue.” Deftly deploying the palazzo’s many rooms with their multitudes of entrances and exits, Vo creates a meandering exhibition that allows themes and discourses to flow into and mingle with one another.
Text：Huang Hankang

World of Xijing? National Museum of Modern and Contemporary Art

Art in the Age of …Planetary Computation? Witte de With 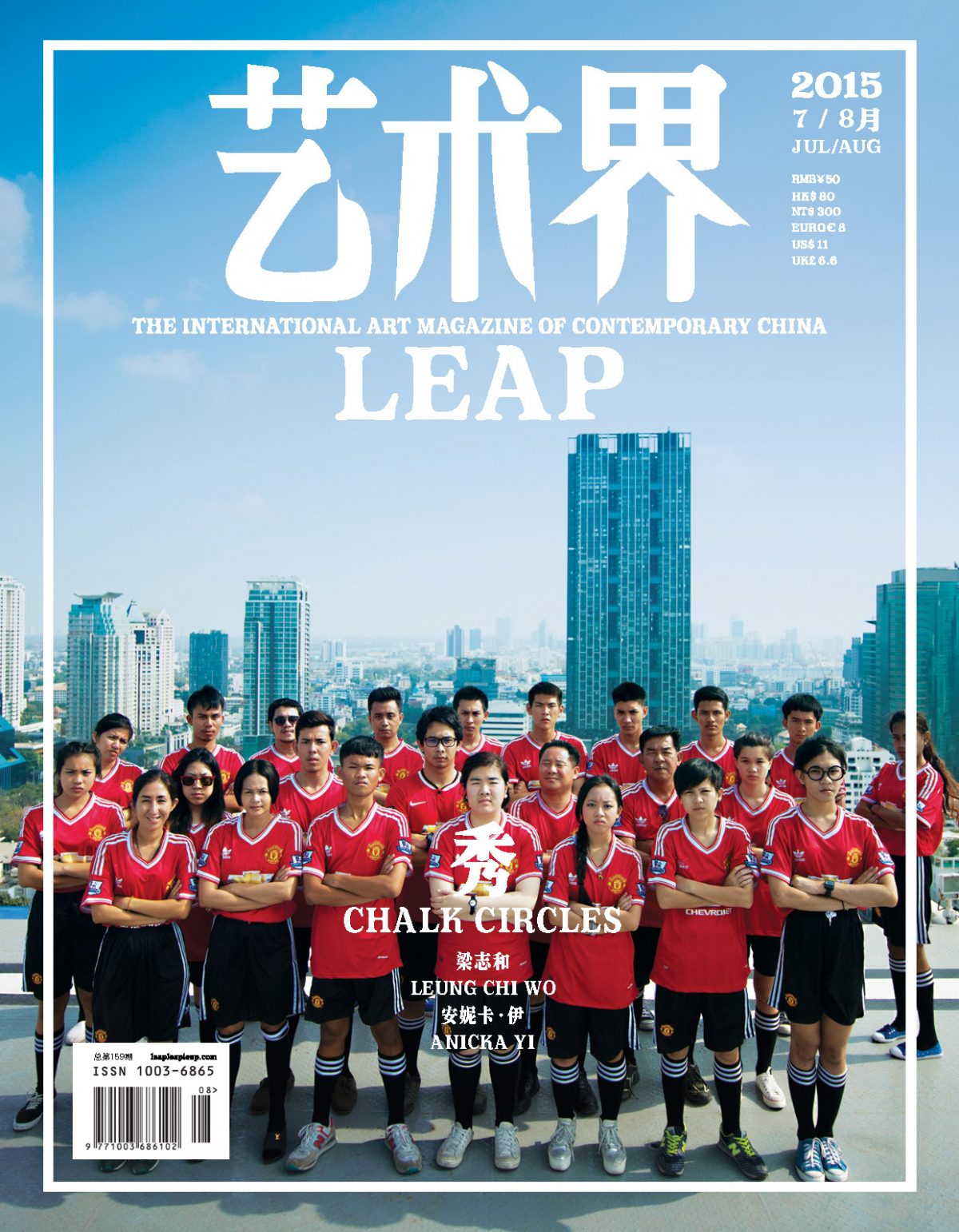